This tutorial provides a brief, step-by-step introduction on how to create, train and test a Bayes Point Machine classifier using the C# API.

If you just want to try out the Bayes Point Machine classifier and you can afford to provide data in a specific format in text files without worrying about ultimate performance, you may want to take a look at the command-line runners.

Predicting gender from height and weight

For the purposes of this tutorial, let’s imagine that we would like to predict the gender of a person given their height and weight. Let’s further assume that we already collected measurements for a sample of size N = 1000, and that we know the gender for each individual in the sample. The below figure visualizes the sample that we shall be dealing with here: 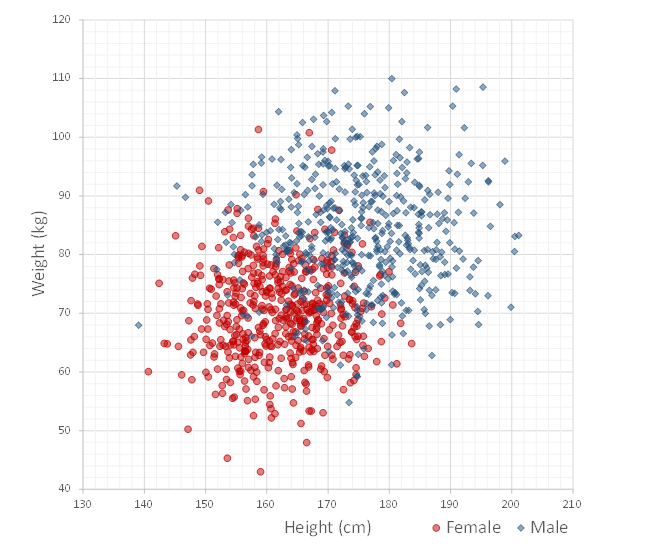 The sample contains the measurements for 508 women (red) and 492 men (blue). The average female height in the sample is 162cm and the average male height is 175.2cm. The average female weight is 70.1kg, the average male weight is 83.8kg. As one would expect, the figure shows considerable overlap in the measurements of both groups. This means that one cannot hope to perfectly discriminate between men and women given their height and weight.

Now, given this data, how likely is it that a person of height 183cm and weight 78kg is a woman?

One way to solve a problem like this is to create a probabilistic model. Infer.NET lets you specify a large variety of models. For the classification problem described, we have already specified a general and robust model for you, so you do not have to do that work. However, the model we created, the Bayes Point Machine (BPM) classifier, does make a number of assumptions that you may want to be aware of (see The probabilistic model). If these assumptions are not satisfied in your case, you could consider creating a probabilistic model of your own which better fits your situation!

Getting started in Visual Studio

In the following, we shall answer the above question using the Infer.NET Bayes Point Machine classifier. To do this, we will first have to set up a solution in Visual Studio:

A word of warning:

Data can be stored in a variety of different formats. Typically the format of your data will be inconsistent with the type of data that a learner expects. This means that you have to convert the original data into the format of the learner. This is certainly a reasonable option for small test cases, but for large real-world data sets, it may be costly to do this conversion. Instead of forcing the input data to be of a fixed type, the Infer.NET learners provide you with a flexible mechanism which allows you to specify how the learner should consume their input data. This mechanism is called a mapping. A mapping defines how input data is passed to the Infer.NET learner. Since it lets you choose the most convenient format, it helps avoid unnecessary data conversions.

To implement the IClassifierMapping interface, we thus need to specify

With this mapping in hand, it is now straightforward to create a Bayes Point Machine classifier:

We can use the classifier to learn and predict gender from height and weight. To train the Bayes Point Machine on our sample of 1000 artificially generated measurements, we write

Note that you do not need to set any parameters, such as prior distributions over weights, to train the classifier. This is because the Bayes Point Machine is essentially hyper-parameter free! Not only does this avoid a misspecification of parameters, it also removes the need for time-consuming parameter tuning! Even better: it is not even necessary to normalize the input data as the Bayes Point Machine automatically adapts to the different scales in the observed features. All of this is made possible by heavy-tailed prior distributions over weights (see the section on modelling for more on this).

Having trained the Bayes Point Machine, we are able to predict gender for previously unseen height and weight measurements. In particular, we can answer our initial question of how likely it is that a person of height 183cm and weight 78kg is a woman.

To do so, we write

where testSet.FeatureVectors is an array containing a single Vector which consists of the centred height and weight feature values for 183cm and 78kg (and a constant which acts as bias).

Calling PredictDistribution returns a (Bernoulli) distribution for each instance in the test set, reflecting the fact that we cannot usually be certain about the gender of a person given only her height and weight. In particular, we have

So someone who is 183cm tall and who weighs 78kg is female with a probability of 7% (based on the 1000 observations present in our training set).

In many situations, you may be required to choose a precise answer when making a prediction. Instead of calling PredictDistribution, you then simply call Predict. To get an answer for the first instance in the test set, we write

Since the first instance in the test set corresponds to the person of height 183cm and weight 78kg, this yields

Note that such a precise classification still requires the computation of the predictive distribution as an intermediate step. Moreover, the optimal precise answer is not necessarily the most probable class (more on this in Prediction).

To evaluate the predictions of a classifier we need to avail ourselves with some labelled data distinct from the training set. Let’s therefore assume that we have access to a test set of 100 additional height and weight measurements together with their corresponding true gender records.

An evaluation is carried out via a ClassifierEvaluator, which can be created as follows:

ClassifierEvaluator provides many of the evaluation metrics that are popular in classification. For instance, to compute the number of classification errors and the area under the receiver-operating characteristic (ROC) curve, we can write

ClassifierEvaluator also allows you to get the receiver operating characteristic curve itself (for “Female” as the designated positive class): 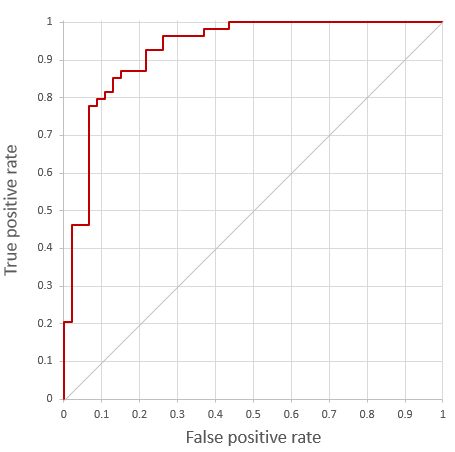 To find out more about classification evaluation, click here.

Summary and overview over remaining sections

We have given a very brief overview of the Infer.NET Bayes Point Machine learner, a Bayesian classifier which does not require parameter tuning or feature normalization. In particular, we have seen how to

In the following section, Learner API, we will discuss these features in more detail. We will also describe many features that we have not dealt with in this introduction, such as