The Bayes Point Machine: A probabilistic model for classification

to which an instance of interest belongs, given relevant feature values

of this instance and the information in

over classes, conditional on

. In the following we provide a direct specification of the predictive distribution

based on a set of assumptions. The derived classification model thus falls into the discriminative paradigm.

For simplicity, we will start by describing the model for the case of two class labels

. The model is defined by the following assumptions:

This means that it must always be possible to compute all feature values. If features are missing for some instances, you will either have to fill in the missing values in a pre-processing step, or use a different model for classification.

Assumption 2: The order of instances does not matter.

That is, instances are assumed to be exchangeable. As a result of this assumption, the predictive distribution

is characterized, for any given

, by the same latent parameters

, also referred to as weights.

If the predictive distribution varies with time, for example in the stock market, then you will need to expand

to include time information or use a different model for classification (such as a time-series model).

Assumption 3: The predictive distribution is a linear discriminant function.

is called the score of the instance.

To allow for measurement and labelling error, we add Gaussian noise to the score:

This is also known as a probit regression model.

The model up to this point, represented as a factor graph, is depicted below: 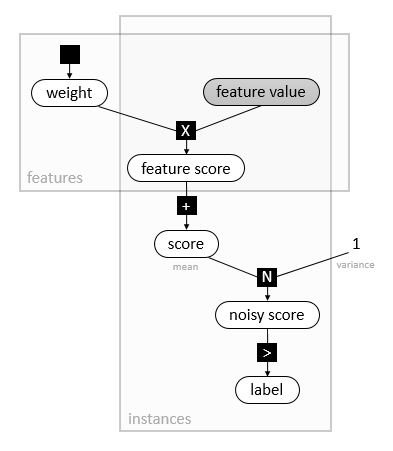 Finally, by specifying the prior distribution

, we complete the probabilistic model for the Bayes Point Machine classifier. We use a heavy-tailed prior, a normal distribution whose precision is itself a mixture of Gamma-Gamma distributions (as illustrated in the factor graph below, where

denotes a Gamma density for given shape and rate). Compared with a Gaussian prior, the heavy-tailed prior is more robust towards outliers, i.e. feature values which are far from the mean of the weight distribution, 0. It is invariant to rescaling the feature values, but not invariant to their shifting (to achieve the latter, the user must add a bias - a constant feature value - for all instances). Due to the factorized structure of

, features should be as uncorrelated as possible. 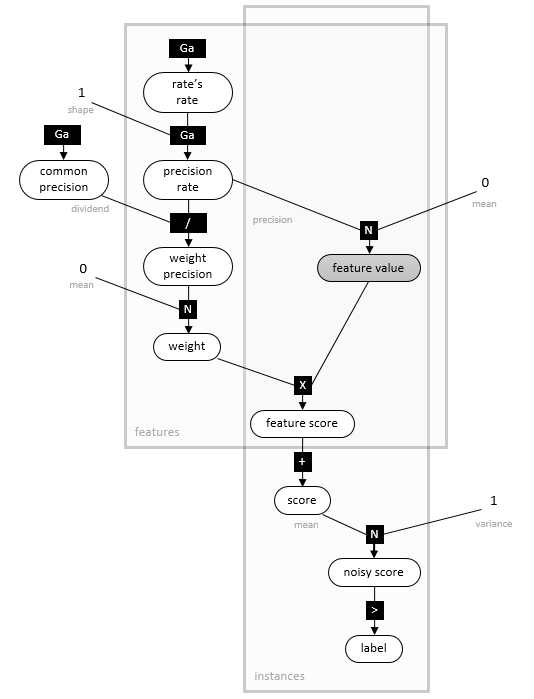 The multi-class model is very similar to the described binary Bayes Point Machine model. Instead of a single linear discriminant function, there are now

functions with their respective weight vectors

, one for each class

. The maximum (noisy) score then determines the class

The multi-class model assumes that the class labels have no inherent ordering, and is thus invariant to permuting the set of labels. If the labels in your problem have an order, then you can still use this model, even though you might benefit from a different model. 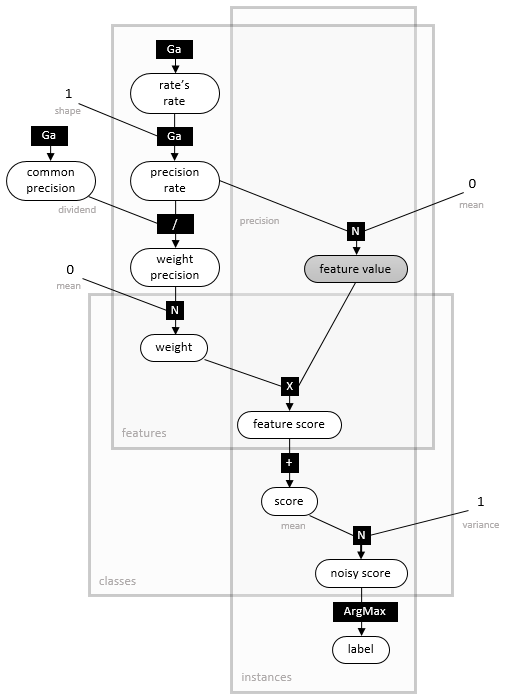 With appropriate symmetry-breaking, using the multi-class model with 2 classes is equivalent to the binary model described above. However, an exception will be thrown if you try this. Finally, the computational cost of prediction in the multi-class model is quadratic in the number of classes

, making it less ideal a choice where

The Infer.NET code for the previously described classification models lives in the Learners/ClassifierModels project. The project uses the Infer.NET compiler to generate dedicated training and prediction algorithms from the models.