We’re going to discuss how to use Infer.NET to implement the Community-based Bayesian Classifier Combination (ComminityBCC) model for aggregating crowd-sourced labels described in the paper:

This models is designed to work in a typical crowdsourcing scenario where we wish to classify a number of items based on a set of noisy labels that were provided by multiple crowd workers with varying levels of expertise, skills and attitudes. To obtain the set of accurate aggregated labels, we must be able to assess the accuracies and biases of each worker who contributed labels. Ultimately, these estimates of the workers’ accuracy should be integrated within the process that infers the items’ true labels. Prior work on the data aggregation problem in crowdsourcing led to an expressive representation of a worker’s accuracy in the form of a latent worker confusion matrix. This matrix expresses the probability of each possible labeling outcome for a specific worker conditioned on each possible true label of an item. For example, by looking at this matrix we can figure out whether the worker is biased towards a particular label range. See the example below with confusion matrices for three-point scale labels (-1,0,1). 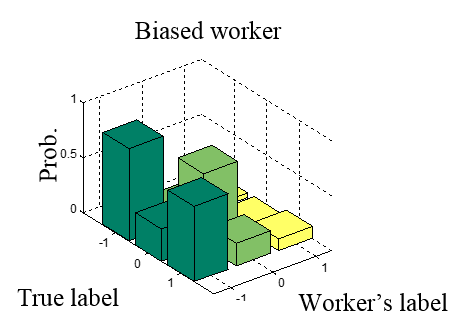 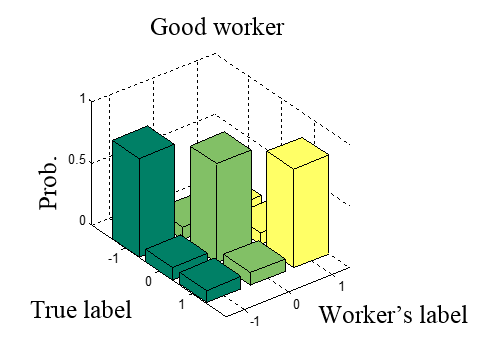 A standard framework to learn the latent worker’s confusion matrix is the Bayesian Classifier Combination model (H.C. Kim and Z. Ghahramani. Bayesian classier combination. International Conference on Articial Intelligence and Statistics, pages 619-627, 2012). This model assumes that there are K workers classifying N objects (or tasks) among C possible labels. These counts are shown in the corresponding plates (the rectangles) of the factor graph illustrated below; arrows are included to show the generative flow. 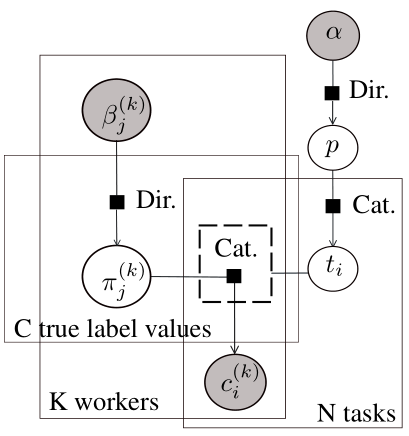 Recall that plates represent parts of the graphical model which are duplicated - if N is the size of a plate, there are N copies of all factors and variables within the plate. In Infer.NET, plates are represented by ranges:

We also have another range kn that is set up to represent the jagged intersection of the worker/task plates; workers typically judge only a small subset of the tasks, and a jagged range is a syntax which allows you to specify this. Then, after creating an array of task counts, WorkerTaskCount, with values given by the number of tasks labelled by each worker (observed at run-time) the kn ranges are initialized as follows:

Then, the generative model of BCC attempts to explain the observed worker’s labels as a random draw from a categorical distribution with parameters specified by the rows of the worker’s confusion matrix. Specifically, each row is selected by the true task’s label, which is an unobserved random variable. In Infer.NET, this process can be coded as follows:

For a more efficient implementation, we use the subarray factor to extract the sub-set of tasks labelled by the user from the taskLabel array, which is faster than using the full array of task labels. 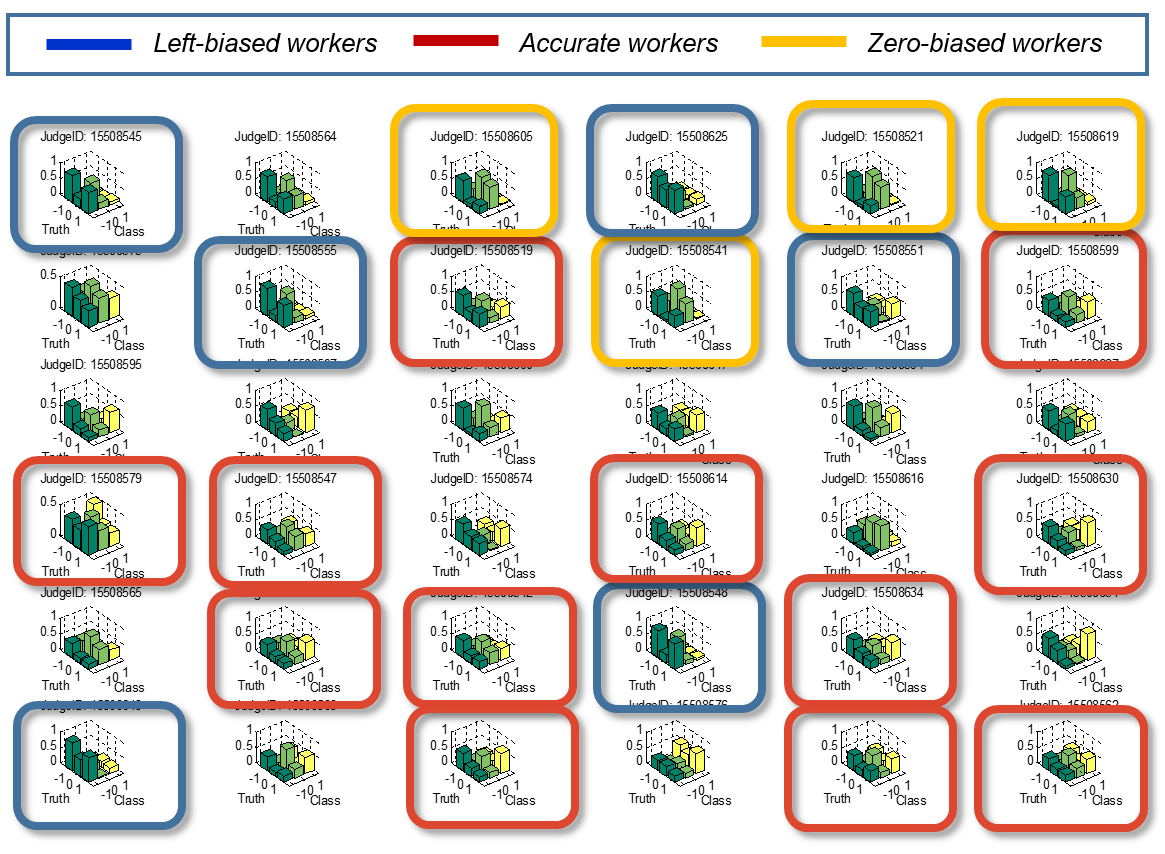 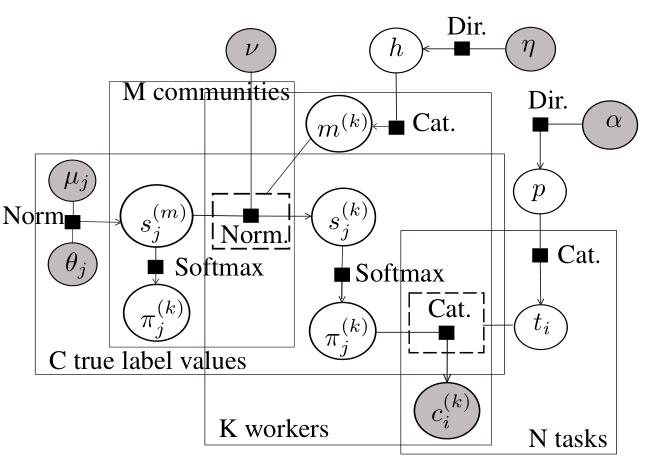 To implement this model in Infer.NET, we need to add a community range to the BCC ranges:

Then, we code the steps of the generative process of CommunityBCC as follows:

Notice that the row of the worker’s confusion matrix, ConfusionMatrix[k], is used to generate the worker’s label in the same way as described above for BCC. At this point, we can observe a data set encoded as a matrix of task indices (i.e., the indices of the tasks labelled by the workers) and worker’s labels:

Finally, we run inference on this model in the standard way by creating an inference engine and calling Infer.

How to find the number of communities

Take a look at computing model evidence for model selection in Infer.NET here. Then, we can select the optimal number of communities by looking at the community count with the maximum model evidence.

How to set the other hyper-parameters

In addition to the community count, the model has other hyper-parameters that need to be set for training:

You can set these hyper-parameters at run time using ObservedValue. As with community counts you can use model evidence to guide these settings. For training on our data sets, the BackgroundLabelProb and the CommunityPseudoCount are set uninformatively with normalized uniform probabilities across the number of labels and communities, respectively and the NoisePrecision = 5. For the parameters of the community score matrices we provide two ways of specifying the mean ScoreMeanParameters and the precision ScorePrecisionParameters of their multivariate Gaussian prior. Specifically, you can either use ObservedValue or indirectly set the values of the communities confusion matrices and infer the communities score matrices by calling the method GetScoreMatrixPrior(). The latter (which uses the BCC hyper-parameter InitialWorkerBelief) is useful since the communities confusion matrices are usually more interpretable than the communities score matrices.

We tested this model on four different crowd-sourced datasets and our results show that this model provides a number of advantages over BCC, Majority Voting (MV) and Dawid and Skene’s Expected Maximization (EM) method. Firstly, its community reasoning enables a two-ways transfer learning between workers and communities that makes the model more robust against sparse label sets, i.e., sets that contains only a few labels per worker and task. As a result, CommunityBCC converges faster to the highest classification accuracy using less labels. Secondly, the model provides useful information about the number of latent worker communities with their individual confusion matrices and the community membership of each worker. The full set of results and more details about this model can be found in the paper.

Take a look at the full code (details below) and let us know your experiences in using this model.

Full code for this model:

The full C# code is in the Crowdsourcing project.